A Festival of Living and Dying

When my brother Billy died his funeral was a solemn ceremony. The year following his death my family were not allowed to celebrate birthdays, Christmas, Diwali or any occasion out of respect for him and the family. However when my mum died her funeral was a joyous occasion as she had lived a full life leaving behind a blossoming family of children, grandchildren and great grandchildren.

I became a Christian many years ago and I have never felt I was Sikh. I flew away from Sikhism and my family only now in later life to feel part of the family and wanting to know and learn from my sisters.

I am blessed that I have a number of families and as I grow in age I have come to love my family and wish so many years had not been wasted arguing and fighting.

My mother Piaroo died on 3rd April 2014, she had a stroke five years before which left her paralysed and bed bound. When she died I automatically assumed her funeral would be like my brothers’.   Although the rituals were the same it was also a celebratory affair.

There are many rituals to a Sikh funeral and the first one is the three day Paart (prayer) which is continuously read from the Guru Granth Sahib which is the Holy Scripture, it is read from beginning to end, day and night from the deceased’s home. The family arranges several Gianijis (priests) to read the scriptures over the period via a rota system. During the change over there must not be a break in the readings and no television, radio or alcohol is permitted, everything has to be pure. The prayer is not just for the dead but also for the living to remember God’s wishes. As you listen to the Paart it brings the listener great comfort and blesses the house and family. The relatives listen to the reading sat on the ground facing the Guru Granth Sahib. The last four or five pages are left to be read and completed in the Gudwara (Temple) after the funeral.

The body is cleansed by the relatives. I joined my sisters and aunties in bathing my mum. This was one of the hardest moments in my life and without the support of my family I would not of been able to participate. They gave me the strength to be a part of such an important ritual. Once her body and hair had been washed we used baby oil to moisturise her as this is something that my mum used to do on a daily basis. 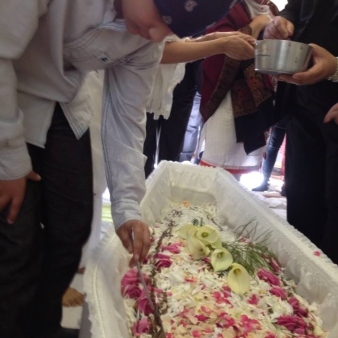 My sisters had chosen the clothes she was to wear-

In life Sikhs are to wear the five Ks as a symbol of their faith. The Five Ks signify discipline and spirituality. They are :

Kesh  = Hair which is not be be cut and is covered with either a turban or chuunie (ladies scarf). Kesh is a symbol of holiness.

Kirpan  = Sword which signifies a willingness to protect the weak and defend against injustice.

Kara = Bangle which is made of steel and represents strength and integrity.

Kangha = Comb which is made of wood and quite small. The kangha signifies cleanliness

Once the body has been prepared, all the bathing lotions are left behind which helps with detaching from your loved one.

Food is a very important part of grieving. Family and friends bring food for the family, mainly food that the deceased loved. For my mother we did a two week menu and everyone cooked different dishes and brought them for us. When visitors came they would talk about mum and focus on all the good memories and share their own experiences with us and also encourage us to eat. Everyone wanted to cook some of mums favourite dishes, no one was left out.  I concentrated on the traditional tea. My mum was a friend to everyone from every culture age and background. Her door was always open and it showed by how many people came and shared their precious memories with us.